//The history of Lagos

Lagos is an ancient maritime town with more than 2,000 years of history. The name Lagos has a Celtic origin and is derived from the word Lacobriga. Lagos first became a settlement of the Carthaginians, who recruited Celtic tribesmen in their war against the Romans (the Punic Wars). Later it became colonized by the Romans, becoming part of the Roman province Lusitania. Some Roman remains can still be found in Lagos and the surrounding countryside. Quintus Sertorius, a Roman rebellious general, helped by the Lusitanians of Lacobriga, successfully fought a battle against the Roman army of Q. Caecilius Metellus Pius probably at nearby Monte Molião.

Lacobriga was already in those times an important harbour. The town was occupied in the sixth century by the Visigoths from the Kingdom of Toledo and later by the Byzantines. The Moors came in the eighth century. They renamed the town Zawaia (meaning Lago = lake). It was part of the coastal region al-Gharb (hence the name Algarve). The Moors fortified the town and established important trade links. In 1174 the local Wāli gave permission for the construction of a church of St. John the Baptist outside the town walls. This is the oldest church in the Algarve. 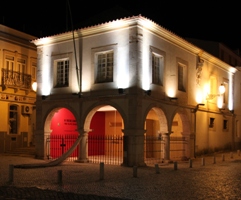 Even as King Afonso Henriques was reconquering Portugal (the Reconquista), the southern part (Algarve and Alentejo) remained under Moorish domination. It was captured by King Afonso III of Portugal in 1241. After the complete capture of Algarve in 1249 the king gave himself the title “King of Portugal and the Algarve”, stressing the fact that the Algarve, after the long rule by the Moors, was considered a foreign country and not part of Portugal.

Lagos became an independent jurisdiction under the rule of King Pedro I in 1361. King João I assembled his fleet in the harbor of Lagos, before setting sail for the siege and conquest of the city of Ceuta in 1415. This was the first step in opening the Arabian world to medieval Europe, which in fact led to the Age of Discovery with Portuguese explorers sailing across the whole world.

Thus Lagos became important during the 15th century period of Portuguese exploration. Prince Henry the Navigator, third son of King João I, lived most of the time in Lagos. From here he directed expeditions to Morocco and to the western coast of Africa with caravels, lateen-rigged ships with excellent seafaring capabilities.

Lagos was also the home port for Gil Eanes who was the first to sail beyond Cape Bojador in 1434, then considered the end of the world. This was a breakthrough in the Portuguese exploration of Africa. Lagos was at least as important during the Age of Discovery as Cape Canaveral was during the early years of space exploration. 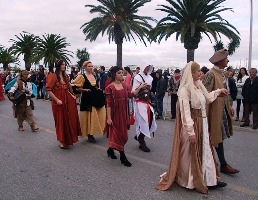 It was also through Lagos that the first African slaves entered post-medieval Europe. There is a 17th century building standing on the exact site where the first slave markets were held in the 15th century. As the major sponsor of these expeditions, Prince Henry received one fifth of the selling price of the slaves. After his death the town began to slumber as the Royal family lost interest in the Algarve. All major trading houses then took up residence in Lisbon.

King Sebastião, obsessed with his plans for a great crusade against the kingdom of Fez, assembled a huge fleet in Lagos in 1578. During this ill-fated attempt he and most of Portugal’s nobility were killed in the Battle of Ksar El Kebir in Morocco.

The old Portuguese town was a very beautiful city with many monuments until it was destroyed by the earthquake and tsunami of 1755. But it still preserves some rebuilt walls from the 16th century, a governor’s castle from the 17th, and the site of what is believed to have been the first black slave market in Europe (the Mercado de Escravos, opened in 1444).